An Inordinate Fondness for Beetles.

J.B.S. Haldane (a British geneticist and evolutionary biologist) was  asked by a group of theologians what he had learnt  about the Creator from the study of creation. Haldane, an atheist, is alleged to have replied “If one could conclude as to the nature of the Creator from a study of creation, it would appear that God has an inordinate fondness for stars and beetles.”

He actually wrote “The Creator would appear as endowed with a passion for stars, on the one hand, and for beetles on the other, for the simple reason that there are nearly 300,000 species of beetle known, and perhaps more, as compared with somewhat less than 9,000 species of birds and a little over 10,000 species of mammals. Beetles are actually more numerous than the species of any other insect order.” *

Well whatever Haldane said or wrote, I definitely have a massive fondness for beetles – I have worn a silver scarab round my neck for over thirty years and one of my earliest memories has to do with a delicious glass case full of metallic sheened beetles that stood on the mantelpiece in the assembly hall of the Froebelian School that I attended as a very small child. I would take any opportunity I could snatch to have a good look at them. If I could I would have stolen the case; I suffered from pleionexia even then.

I remember someone told me that the great big green monster that held pride of place was called a “Green Buzzard” and for years I believed that was its real name. I now know that it was probably a Rose Chafer, a relatively common beetle that can be found in the UK.

The beetles in the first picture are from la Specola – that treasure house of delight in Florence. The one pictured above is from the D’Arcy Thompson Museum in the University of Dundee. I spent a merry month on a placement with the University Museum Service and the best thing was the run of the museum storehouse – how I loved it!

The D’Arcy Thompson museum is a shining jewel in the dark heart of the Carnelly building, which used to house the medical school but now is an annex to Life Sciences. I love the anarchic way some of the exhibits are displayed – this Cadette beetle is not the only creature housed in an old cigar box. Note the use of Elastoplast and pins to hold the test tube in place!

In the storehouse many of the specimens are the worse for wear. Bent pins litter the stained base of the display boxes. Beetles have lost their antennae or (in some extreme cases) their whole body.

Little does it profit this stag beetle to have huge mandibles when it has nothing to use them for.

And this bizarre melee of beetle body parts reminds me of Dr Seuss and his ‘Tweetle Beetle Bottle Battle’.

Let’s have a little talk
about tweetle beetles….

What do you know
about tweetle beetles?
well…

And when they
battle in a puddle,
it’s a tweetle
beetle puddle battle.

AND when tweetle beetles
battle with paddles in a puddle,
they call it a tweetle
beetle puddle paddle battle.
AND…

…they call this
a tweetle beetle
bottle puddle
paddle battle muddle.
AND…
When beetles
fight these battles
in a bottle
with their paddles
and the bottle’s
on a poodle
and the poodle’s
eating noodles…

from “Fox in Socks” by Dr Seuss.

I had already done my own take on Dr Seuss and his beetles, but it seems that I have not done with Coleoptera yet. I cannot blame la Specola (I’d like to but it’s too deeply entrenched a habit).

When I took part in #ArbroathTemplate,  a residency by Bob and RobertaSmith hosted by Hospitalfield, beetles crept in.

And I’m still drawing them in preparation for a series of ceramic pieces. 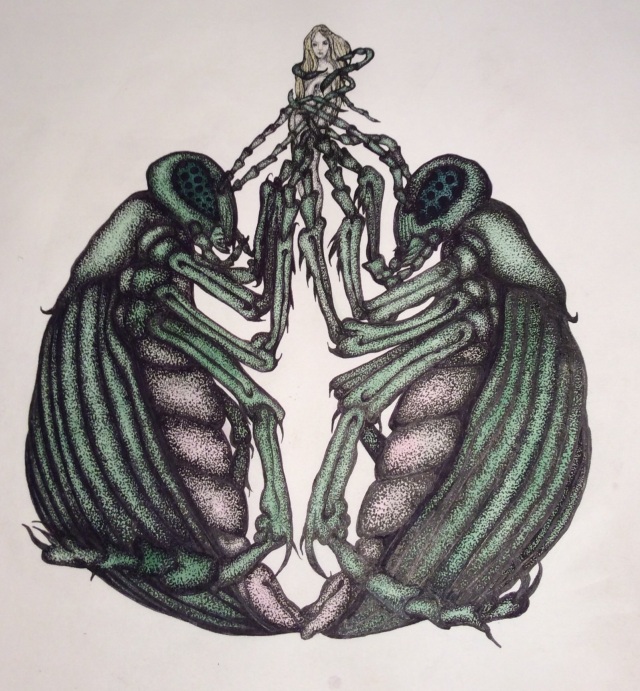