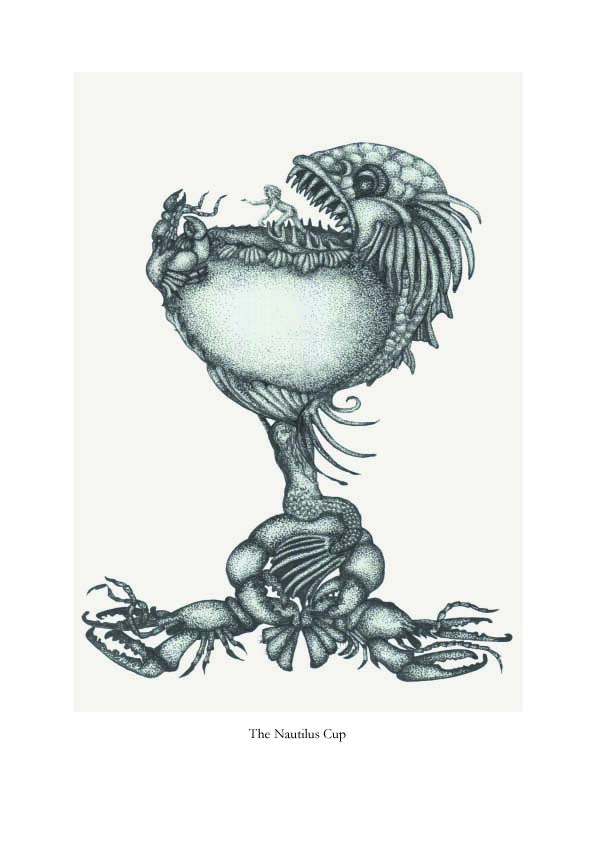 This drawing is an illustration from my third positioning paper. I had been exploring notions of greed or pleionexia in Dutch pronkstilleven painting from the Seventeenth century.

I have already mentioned that there is a disturbing under current which runs below the surface of these luxurious paintings like an unpleasant and lingering aftertaste. The painting below is “Still Life with a Nautilus Cup” by Willem Kalf, 1662. I adore this picture – the cup itself seems to radiate a warm lambent glow but there is a certain uneasiness about it that goes beyond the monstrous jaws of the sea beast and the sad little fellow eternally fleeing those terrible teeth.

In ‘Still Life and Trade in the Dutch Golden Age.’ Julie Hochstrasser argues that the paintings leave untold the ‘disturbing truths about the acquisition of the various objects they picture’. These ‘troubling complexities’ (which include Dutch colonialism and slave trade) are described as ‘absent presences’ which are ‘glossed over in these elegant renderings’.

No image is as evocative of this as the nautilus cup. The beautiful nacreous shells were sourced from the South Pacific and set in a mount of gold or silver, often studded with precious gemstones. The shells were greatly prized and with the establishment of the Dutch East India Company in 1602, the Dutch had acquired a default monopoly over the import of nautilus shells.

Imagine my joy when I saw this little beauty in La Specola museum in Florence! I had not seen one ‘in the flesh’ before. Note the date – this cup is actually Italian, it was made before the Dutch had gained control on the import of these fragile but exquisite shells.

But things can only get better – from no shells to more shells than you can shake a stick at!

The Pitti Palace is known for its vast collection of paintings, sculpture and other treasures. It has a number of smaller galleries set like smaller jewels around the mighty diamond of the main museum.

One of them is the Museo del’Argenti which is possibly one of the greatest expositions of pleionexia it has been my delight to visit. They don’t just have one measly nautilus cup like La Specola. No siree! they have cases and cases of them.

Here is just a tiny selection. 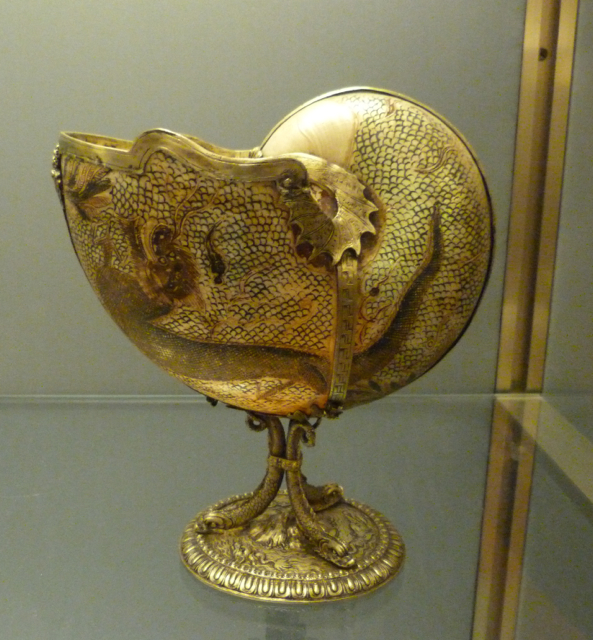 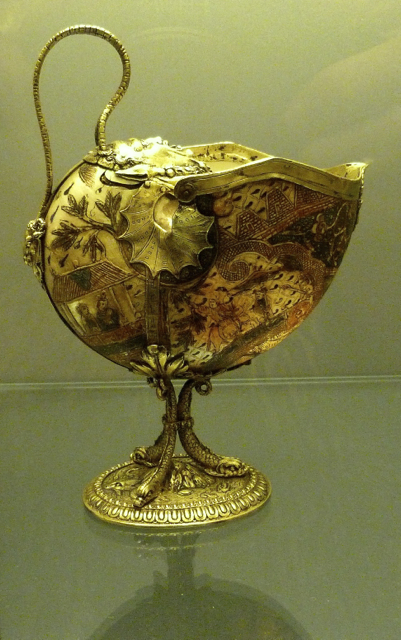 Some of them are confusingly similar.

I suppose the collector just couldn’t say no to yet another beautiful but essentially useless cup. They are fragile but heavy, and far too cumbersome to drink from – their purpose is solely to show status.

I especially like this double nautilus with the cut out filigree gold footing  but heaven knows what use it could serve beyond showing how rich you were.

This one has charming details, the little soldier or sailor with his pike staff on a raft and the tortoise (a Medici symbol) holding up the base. 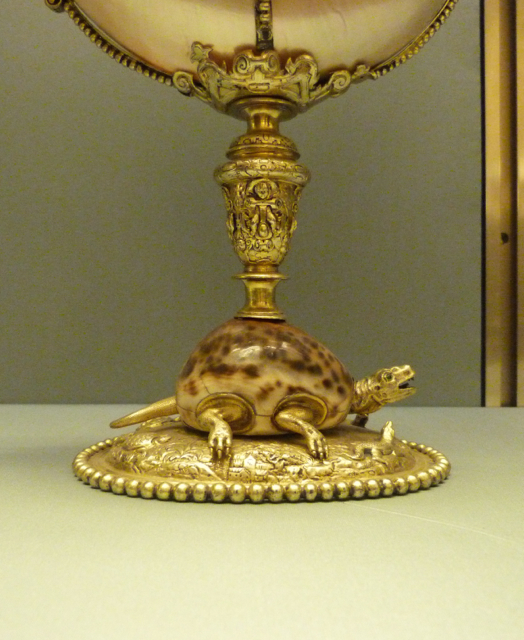 The tortoise is fashioned from a large spotted cowrie shell, another exotic prize from the south Pacific.

Sometimes shells were fashioned into other creatures like this snail, which incidentally, is almost certainly not of Dutch provenance, but then, the shell is not a nautilus either. 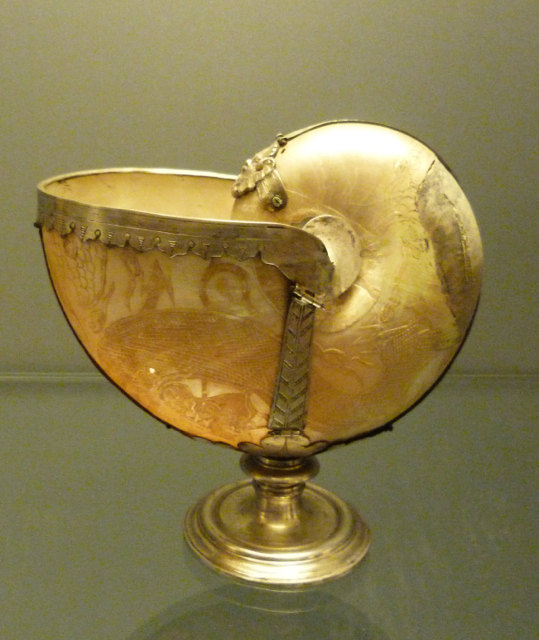 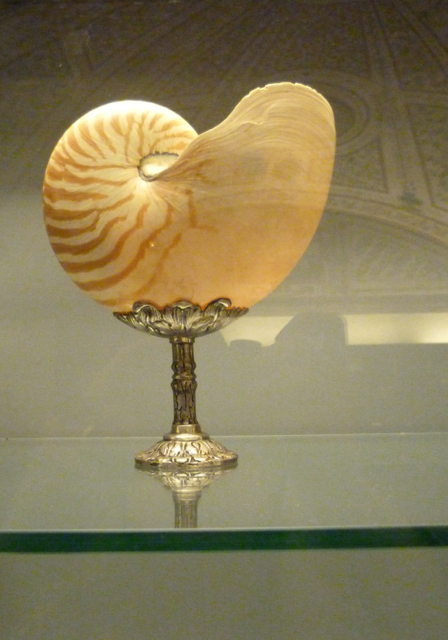 I like the tailed creature on the stem below.

And these dolphins are apparently controlled by flimsy gold reins held by even more flimsily clad cherubs and heroic figure. 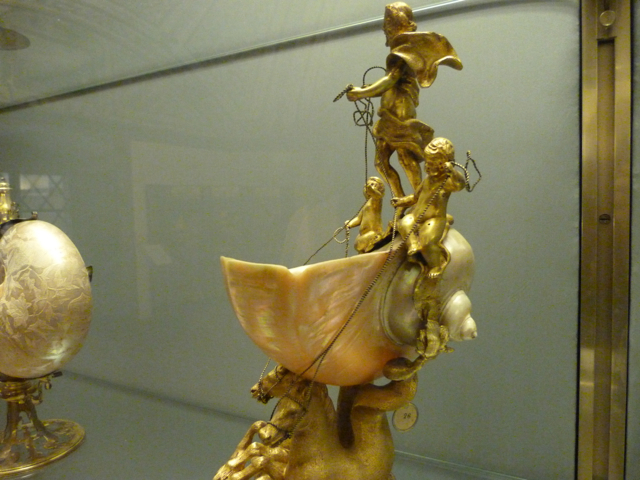 Another version on the trio of drivers; this time it’s horses not dolphins.

And a horse drives a sea serpent on this exquisite ewer. If I could have just one of these jewels it would have to be this.

Talk about an embarrassment of riches!

1 Response to The Nautilus Cup