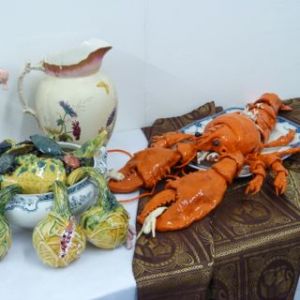 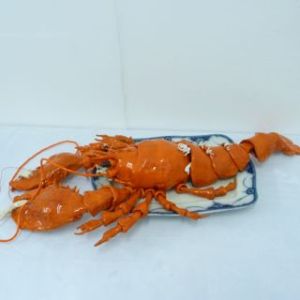 ‘Pictures appeared to be associated in most peoples’ minds with a vast canvas of a ham, a lobster, a brace of teal, a flask of wine, a cheese with lifelike grubs on it, fresh strawberries with a giant ladybird, and a dead stag thrown carelessly across the lot…’ when she wrote those now (mostly) forgotten lines Angela Thirkell was voicing the appetite of an age that had been blighted by six years of rationing during World War II. Her novels continued to mirror the post war age of austerity with continual reference to images of food. However, the paintings that she refers to were produced during a time of plenty; the Dutch colonial age.

These ‘sumptuous and ostentatious’ still life paintings of the Dutch seventeenth century have a curious and intriguing contradictory quality. They celebrate the riches and abundance of the Dutch nation but they also sound a minatory note – vanitas vanitatum. A vanitas painting was intended to be a reminder of the transient nature of our mortality, the futility of pleasure and the certainty of death. Of course, this might be a convenient excuse for having a lovely painting of attractive and costly objects which could only have been afforded by the wealthy, an excuse that would have suited the Calvinist conscience very well indeed. These luscious paintings were objects of desire and ostentation, and were found in the houses of the rich.

It must have been very pleasant indeed to look at these beautiful paintings of luxury items and feel that you were improving your immortal soul. Indeed, speaking as someone who spent too much of my gilded youth working in a bookmakers’, it looks like an each way winner to me.

Unlike Angela Thirkell’s people, these paintings don’t make me feel hungry. In fact sometimes there’s so much stuff on the table that the effect is more queasy than appetizing, particularly as the ‘Pewter Plate Perilous’ or the haphazardly piled up towers of cheese often seem to be about to slide off the table, possibly right onto the viewer. And often the feasts seem to have been abandoned, half eaten and left; either in some strange Marie Celestian rapture, or, at the very least, by someone who couldn’t be bothered to do the washing up. Nut shells, apple peel already turning brown, pies spilling their guts onto the tablecloth and a fly making sticky tracks over the freshly cut white bread are not a sight that piques my appetite. Maybe there is even a hint that the diners had eaten too well and had to leave the table in a hurry, taken ill or even eaten themselves to death a la mode de la Grande Bouffe.

There is something about these paintings, which puts me in mind of Trimalchio’s feast in which nothing was as it seemed. A disturbing under current which runs below the surface of these luxurious paintings hints at an ‘absent presence’. The exotic foods, precious items, silken fabrics, pearls and seashells from the other side of the world were sourced or bought with the wealth engendered by Dutch colonialism; which had a very dark side indeed. Perhaps Lovecraft’s take on Trimalchio; ‘There was a vision of a Roman feast like that of Trimalchio, with a horror in a covered platter.’ is not so far off the mark.
But I do love these paintings. I find that perplexing though their hidden meanings and disquieting subtext maybe, and despite the somewhat nauseating over abundance I am beguiled by the dull sheen of pewter, the lambent light shining through a nubbly roemer and the delicious nacreous quality of the nautilus cup. And best of all, I adore the stinging red orange of a magnificent lobster painted in minute anatomical detail lurking among the cheese, herring and goblets.

I could look at them all day.